As most runners know, it’s incredibly frustrating to be “out of action”, be it self-imposed, or circumstantially determined (i.e. injury). It becomes doubly frustrating when one sees everyone else having all the fun, and leaving one out of it. This was the case for the Ninja Turtle, who had flirted for a moment with the idea of finishing her year with the Marathon Metz Mirabelle, a fall race in the town where the duo live. However, she very sensibly decided to call it a day after the Alesia Trail, as she was beginning to fatigue from her string of summer races, and it’s always smart to finish on a high, before the injuries and burn out set in.

So what’s a runner to do if she wants to participate in a marathon, without actually running in it? Why, volunteer, of course.

It was the first time the Ninja Turtle played the part of a volunteer at a race, and she highly recommends it. It’s a great way to give back to a sport you love, while still playing an active role in the event. Race organisers are always looking for people to lend a hand, as a LOT of work is involved in putting a race together, things that runners may take for granted while they grumble about the cost of registration.

The Ninja Turtle also roped GodzillaPin and Mickey Mouse into lending a hand, of course.

Starting early, before the sun even rises.

On race day, around the time when runners were having their pre-race breakfast, getting dressed and ready, the volunteers were already out in the freezing cold and dark, setting up barricades and closing off the streets. They even had the pleasure of turning a police car around (vive la France, eh?).

Setting up the signs at the corrals. Carrying heavy loads make for great cross-training workout.

As dawn broke and the departure area was all good to go, the runners started arriving, first in trickles, and then en masse. Along with them came family members, including many excited children. When one thinks about all the sacrifice involved in preparing to run a marathon – the hours spent in solitary self-flagellation in pursuit of a bizarre goal, runners have a lot to be grateful for, especially loving spouses and family who despite months of living with a cranky stats-obsessed, carb-guzzling, occasionally-irrational I-can’t-walk-to-the-grocery-store-I-have-a-long-run-planned-for-tomorrow nutter, show up anyway to cheer, encourage and support said nutter.

And of course, the volunteers who’re always ready on standby to tie your shoelaces, throw your rubbish, hand you a drink, point you to the toilets, argue with angry drivers to keep the roads safe while you run, and tell you how awesome you’re doing at Mile 18.

GodzillaPin and the Ninja Turtle were in charge of ensuring the separation of the marathon relay runners from the full marathon runners, so they only got to see the departure of the race from the back.

But as soon as the marathoners were off, it was time to flag-off the relay runners, and finally the participants of the 7km dash. By that stage, the duo have been running around for 3 hours, but the job’s far from done. They grabbed a black coffee and pastry (given free to the volunteers by the city council) and it was off to the next job: the finishing line.

The first to arrive were the runners of the 7km dash.

All the volunteers were armed with medals, ready to fling over their necks and herd them off as quickly as possible before the marathon runners arrived.

But before they did…

There was the “fun” job of unpacking and unfolding the space blankets, because autumn in Metz = winter anywhere else in the world.

One of the most awesome benefits of being a volunteer of course, is the chance to be up close to the action when the elites arrived. The duo had to wear special access passes because of the tight security. The duo got a view even better than some of the media guys.

The first four across the line were Kenyans, and the first French to arrive placed fifth overall.

One of the Kenyans collapsing upon arrival. Not to fear, he received first aid straightaway.

The Ninja Turtle’s fangirl face upon standing face to face with the winner of the Marathon Metz Mirabelle 2015, Mark Tanui. Enjoy it, you’ll never see another photo like it. She almost passed out from excitement when she got to wrap one of the Kenyans in a space blanket.

Of course, between the first arrivals and the next wave, there was a period of calm. The real work started from about 3 hours after the marathon flagged off, which was midday. The runners streamed in at an impossible rate, and the Ninja Turtle found herself running back and forth grabbing more space blankets to throw around these brave souls.

Quick quick, the runners are coming!

The finish line of a marathon is full of emotions. As the Ninja Turtle dutifully wrapped runners for a few hours (she finally ran out of steam around 2.20pm), she received several weepy embraces from overwhelmed men and women who’ve completed their first marathons, and no less than salty slobbering kisses from two cheeky, opportunistic middle-aged men.

After almost 8 hours of hard work, the duo went home and passed out. 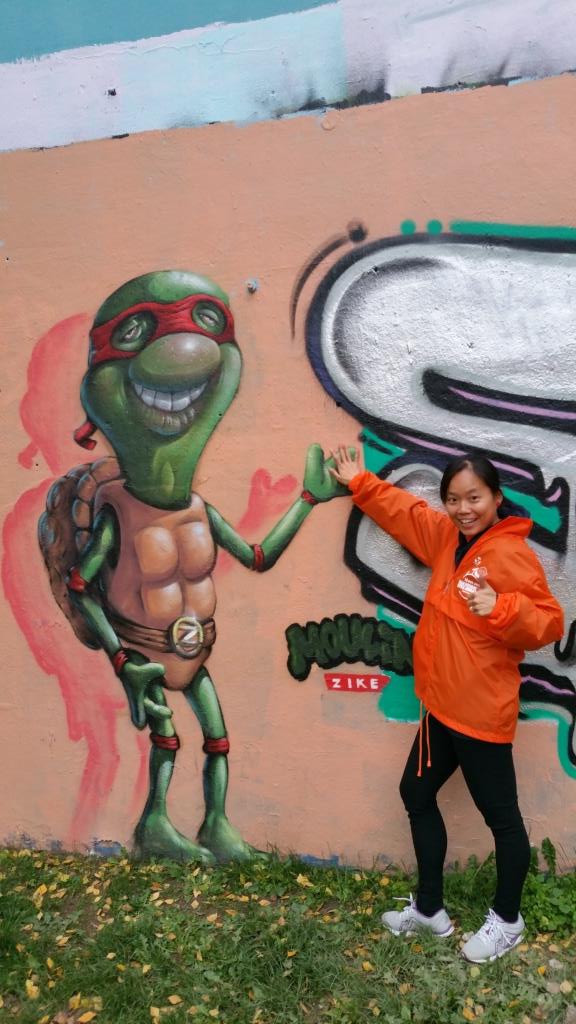 Although it was the Ninja Turtle’s first experience in volunteering at a marathon, it certainly will not be her last.